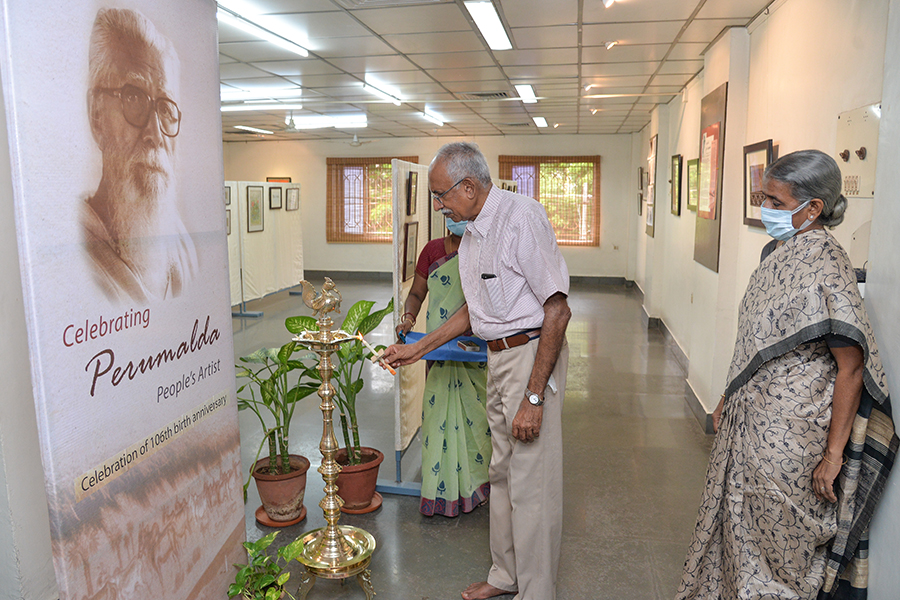 One of Aravind’s greatest contributions to the field of arts was its efforts to recognise the glory and name of A. Perumal, the artist who played a crucial role in the political and art scenario of the country during independence. This year marked the 106th birth anniversary of Perumalda. An exhibition of his art works was arranged at LAICO during August 7-11. Mr. Thulasiraj Ravilla, Executive Director, LAICO inaugurated the exhibition. A workshop was conducted where eminent artists like Ramanan and Ravi Palette as well as LAICO faculty – Mr. Syed Ali and Ms. Dhivya Ramasamy discussed Perumalda’s art works and explained the techniques used by him. Dr. D. Sathish, an alumnae of Aravind handled a session on cartoon drawings. 33 participants took part in the workshop.  Drawing competition was organised for staff members from across the centres. Of the 130 entries received, the best three were awarded. Apart from this, the best drawing from each Aravind centre was given a certificate of appreciation.

Aravind Eye Hospital, Madurai in collaboration with Rotary Club of Madras East, has introduced a device to improve the quality of life of people with vision impairment. Named Smart vision spectacles, the device is very light and portable and is equipped with a variety of functionalities such as detecting objects in the pathway; reading texts in multiple Indian languages; recognising faces. Smart vision spectacles is manufactured by an expert team led by Mr. Ramu Muthanghi, CEO,SHG Technologies, Bangalore in cooperation with VISION AID, an NGO based in Boston, USA,  The trial of the device was conducted at the Vision Rehabilitation centre, Aravind- Madurai by Mrs. Jeyaseeli Flora, Rehabilitationist under the guidance of Dr. P. Vijayalakshmi, Chief, Vision Rehabilitation Services.

Sitapur Eye Hospital, Sitapur has joined hands with Aravind to enhance eye care in Uttar Pradesh over the next five years by working together to make Sitapur the major provider of eye care in that region. As part of this, a team of doctors, MLOPS, management staff, and representatives from Sitapur visited Aravind-Pondicherry. They were taken on a tour of the hospital by Dr.R.Venkatesh, Chief Medical Officer. Dr. V.R. Vivekanandan, Medical Consultant; Mr. Kalaivendan, Manager. Mr. Thulasiraj Ravilla, Director-Operations, Aravind Eye Care System met with the team and held discussions. The team was inspired by the hospital’s simple innovations for better efficiency.